News > A night full of surprises 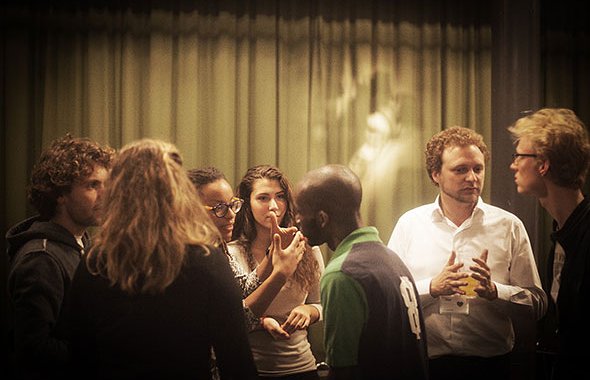 We planned an interactive programme together with  The Flirt Company’s  Esther Populier, which worked surprisingly well and amazed everyone present. Esther’s methodology is to bring people back into their natural state of being, that of being connected to our core and our heart (as opposed to just our heads). Together with her associates Caja van der Poel and Wessel ter Winkel, that’s exactly what Esther did. We can’t give away too many details, as the surprise factor of this programme was a big part of its strength.

“I haven’t had this much fun in a group since I was seven!” - Rachel Visser

We can, however, describe what happened: Caja, who is an amazing storyteller, guided the group into a state of relaxation with her soothing voice, and made us forget about work and networking. Wessel then took over by guiding everyone through a series of exercises that took us right out of our comfort zone, only for everyone to discover that that was actually a nice place to be. We were all in the same boat after all, and as Wessel taught us: making mistakes is awesome! Esther showed every individual the power of being in the moment and the power of silence through another series of short exercises.

It was amazing to see 60+ professionals lose their guard and go with the flow. There was so much energy and laughter, and new connections were made.

We concluded the evening’s programme with an intimate acoustic performance by Iman & Jan, which solidified the connection we made with ourselves, in the moment. After that, there was time for drinks and chatting, some networking and more fun. The party went on well into the AM hours, and we all look back to this Grid Night with a smile.

Would like to read more about real connections? Read here the article written by Esther Populier. (in Dutch, translation will follow soon.)