Except joins the B Corp Movement 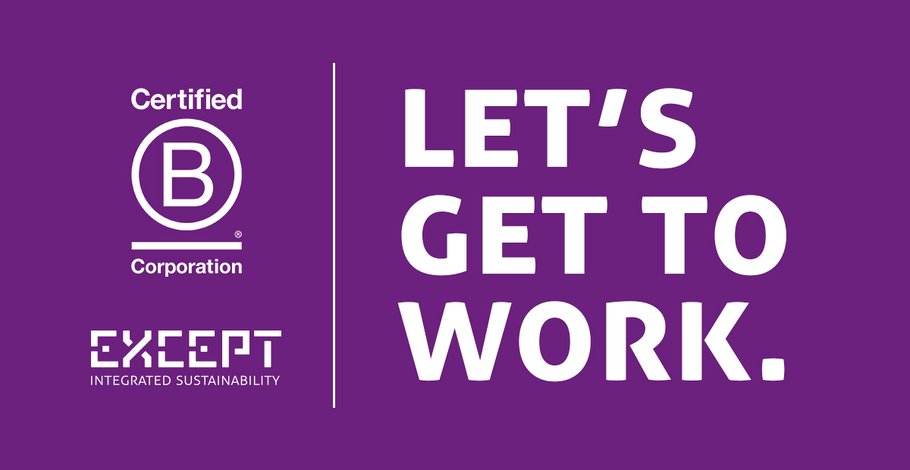 B Corp is a global movement of organizations that hold social and environmental shared value at the core of their business activities. The rising tide of B Corporations is challenging the ‘business as usual’ perspective the world over, pushing a new agenda on the role of business within society and the broader environment. After undertaking the rigorous assessment process, Except Integrated Sustainability became a certified B Corp last month.

My first real experience of the B Corp community came in the form of a booming African drum ensemble just before 9am, on a Monday morning at the B Corp Global Summit in Amsterdam. I was to learn from that moment that a B Corp summit is not like a conference, in the same way that B Corps are not like other businesses. I was lucky enough to enjoy our first introduction to the wide network of B Corps in Europe over two days, taking place against the backdrop of the UN Climate Change Summit. Almost 700 people, from 23 countries, met at the Muziekgebouw in Amsterdam.

Except became a B Corp just weeks before the Summit took place, thanks to the drive of our COO Jeroen Van Der Vlist in leading us through the rigorous assessment process. Embarking on the process was a chance for us to reflect on our own role as an organization. “Does a company like Except need a sustainability certification?” was a question we had to first ask.

Since we have existed, our vision, mission, and shared worldview have held systemic sustainability at its very heart. We have always held ourselves to the highest standards when it came to our own workplace - surely a straightforward requirement for a sustainability consultancy. In regards to the partners that we work with, we encourage them to go beyond the standards of reporting on sustainability, and rather create frontrunning integrated strategies and projects that contribute to a more sustainable society. This is key to our company principles.

What I have come to understand is that B Corp is not merely a certification. It is a movement that seeks to catalyse a more inclusive and regenerative economy. Its standards are essentially higher than the other reporting standards of filling in the forms, and rather a powerful global movement that strives for system change. It is bringing social and environmental standards to influence the most mainstream players.

If you look at corporate standards until now, the sole purpose of a corporation has been to maximize the value delivered to shareholders. We have finally reached a tipping point: the world’s most prominent CEO’s of the Business Roundtable have agreed that they must go beyond shareholder value. They acknowledged the imperative to invest in their employees and protect the environment, while dealing fairly and ethically with their suppliers. Meanwhile, the Financial Times has launched a New Agenda, and declared that ‘Capitalism Needs A Reset’. The biggest players in the world are questioning the very system in which they have come to be.

Since Except set upon our mission of creating the foundations of a sustainable society, 20 years ago, the world has changed a lot. We see new momentum as new companies become B Corps every day, in turn pushing industry forwards. Listening to 700 business representatives applaud Jay Coen Gilbert in stating, “Incremental change is insufficient, individual change is insufficient. We need systemic change.” is far beyond the hesitant ‘business as usual’ rhetoric encountered before.

When we learned about B Corp some years ago, it captured our imagination. Jeroen, our COO said simply, “It’s a no-brainer: the very nature of our company means that we should be a B Corp.”  B Corp forms an important part of a rising tide - one Except is proud to join.

We look forward to becoming part of the community, and we encourage others to join us in doing so. Let’s get to work.

Read more on the B Corp movement here.