This month, the Tomorrow Times dives into urban ecosystems, and on how they process biophysical flows to their advantage. We investigate how envisioning cities like living beings can help us enhancing their resilience, and how we can employ digitalization for this purpose. Plus, of course, your monthly dose of systemic sustainability trends and critical news. 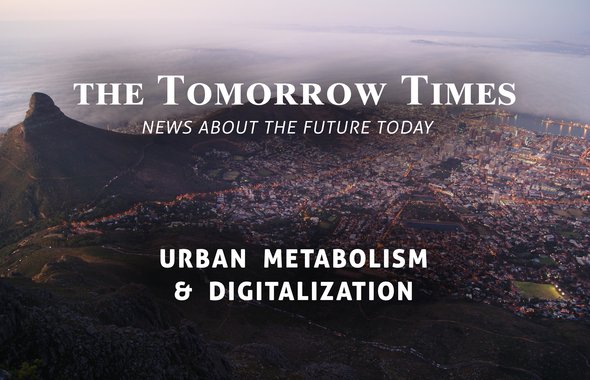 According to a recent UN’s report, more than half of the world’s population lives in urban areas today, and the number is expected to increase to over two thirds by 2050. As a result, cities are the main consumers of resources and the main producers of waste and CO2 emissions.

The urban landscape is a complex, dynamic, and interactive system, where energy and materials flow constantly. Cities grow, decay, or thrive according to internal and external inputs or disturbances. Comparing cities with living organisms unravels a plethora of opportunities for understanding and acting upon pressing urban challenges.

Just as the human body processes resources into nutrients and waste, a city interacts with local, regional, and global flows in a similar way. Urban metabolism is a holistic approach to analyse and monitor these flows. Mapping material, waste, water, energy flows in cities and combining their functionalities with the population’s needs, allows for optimization of decision-making processes.

The deluge of big data provides us with urban information at an unprecedented granularity; the blossom of artificial intelligence and machine learning algorithms strengthens our capacity to tackle various sustainable urbanization issues. As a growing global trend, digitalization presents opportunities to enhance policies and practices rooted in urban metabolism.

In the Netherlands, the Dutch government aims for a fully circular economy by 2050. In order to achieve this objective, buildings will have to be dismantled and materials reused for future construction (report).

Singapore - a ‘city of sensors’, is an example of this trend, and a step of the government’s broader plan to become the world’s first ‘Smart Nation’.

At Except, we are busy developing Symoto - an online software application that enables the development, simulation and monitoring of large scale material and energy cycles.