Serenity Farms is a concept for a sustainable 110ha greenhouse facility for profitable food production in arid climates. The first site is to be located on the west coast of Saudi Arabia, under the vision of the Reza Investment Company. It will be the largest sustainable greenhouse operation in the world. The only water it uses is salt water sourced from the red sea, and is powered entirely by the sun. The core of Serenity Farms is a high tech food production solution that provides fresh fruits and vegetables for 170.000 people. 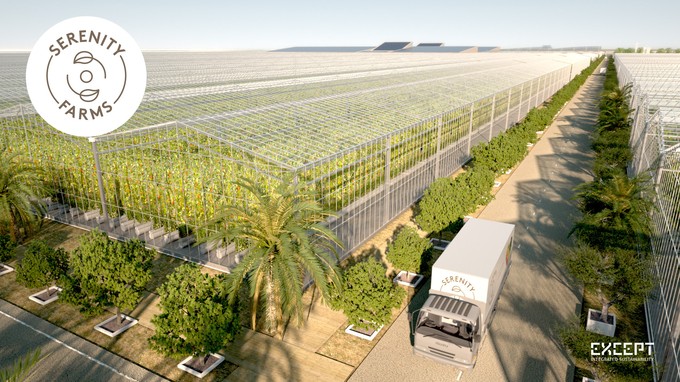 Serenity Farms in a nutshell: 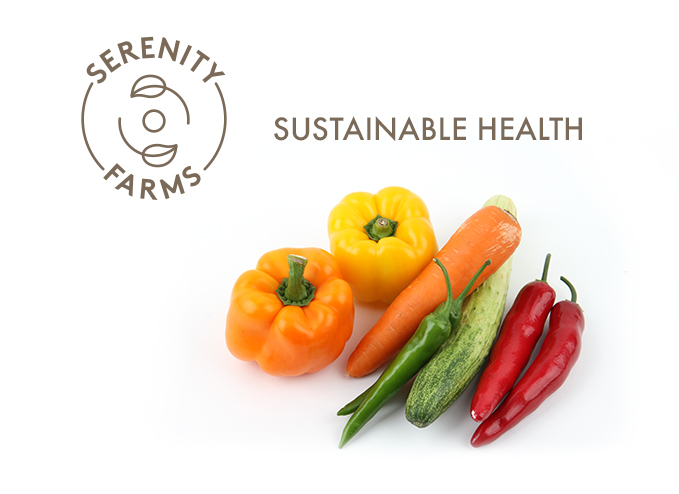 Food in the desert

A changing climate, on top of dwindling resources needed for agriculture, and fast paced population growth, complicates our collective mandate to grow enough food. Food security and effects on national autonomy are of significant concern to many countries. Especially arid countries suffer, with a low natural domestic food production capacity, which includes Saudi Arabia and other GCC countries.

“Taking into account a growing population and shifting diets, the world will need to produce 69% more food calories in 2050 than we did in 2006.”
- World Resources Institute

Serenity Farms employs Dutch greenhouse technology, capable of reducing water consumption by more than 95% compared to local open field agriculture. In addition, the water that is used is desalinated seawater, and the Serenity Farms water footprint is therefore minimal. All energy for the entire facility is gained from the sun, both from thermal and PV sources.

“The ultimate goal of farming is not the growing of crops, but the cultivation and perfection of human beings.”
- Masanobu Fukuoka, The One-Straw Revolution 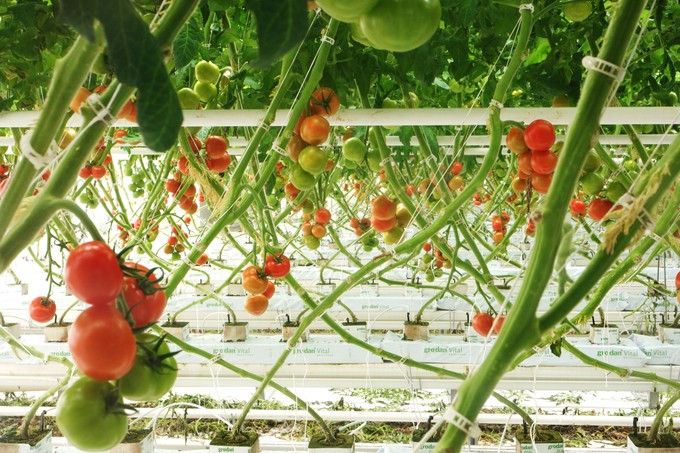 Water as a source of life

In arid regions, water is the most valuable resource, above anything else. Due to the unprecedented consumption needs over the last 100 years, many such regions have started to depend on, and deplete, fossil water sources. Saudi Arabia for example has depleted over 80% of their fossil water reserves in the last 50 years alone, facing the consequences in the near future. In order to prolong the life of the remaining fossil water deposits, and mitigate the economic damage, it has banned the use of water in open field agriculture for cereal and feed crops. While these harsh steps are taken, it is not expected to resolve the shortage in the long term, and many more interventions are expected under the KSA government’s Vision 2030.

Serenity Farms sets a precedent for a new  industry, compliant with Vision 2030 and beyond. It has the potential to expand as a solution into the GCC region, and other arid regions in the world.

End of  the fossil era for fresh food

Global efforts are slowly but steadily turning their backs to fossil fuel. Many countries that were able to build their economy on these industries are looking into the future, and are preparing for an inevitable shift away from oil. Saudi Arabia is facing this challenge, which they address in their Vision 2030. They declare to significantly develop their non-oil economy, funneling current income from oil into new industries which are to help them become more autonomous and switch to a non-oil economy.

Serenity Farms stands to be among the first in a new industry towards fossil fuel free food security, employing renewable energy sources based on solar power. Reducing air freight and using solar power reduces fossil fuel demands and saves 57 tons of CO2 per year. That is comparable with the CO2 emissions of around 17.000 petrol cars average per year. 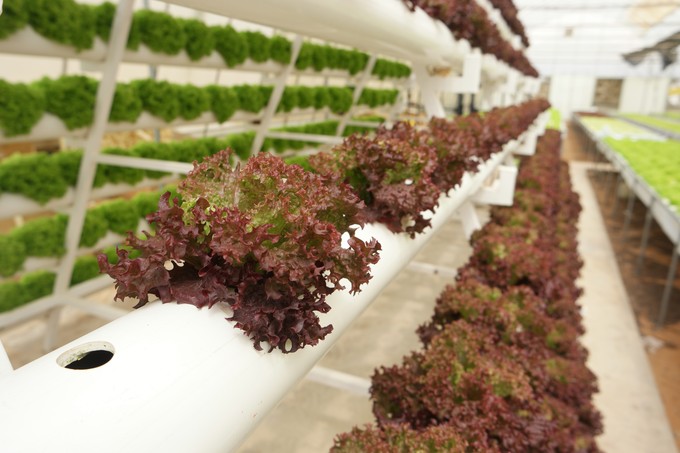 To ensure a long term viable solution which fits snugly into its local and systemic context, the local needs and conditions were analyzed in great detail, in which client knowledge was invaluable. For this, we supplied research into geographical, economical, and technological context, including innovative growing systems, saline growth, algae cultivation, and aquaculture. Under a strenuous review and co-creation process, answers and combinations were sought, not to one challenge, but to all relevant challenges in context.

Serenity Farms was the result, a novel greenhouse complex that gets its electrical power from the sun, and recycles its waste water to extract as much valuable nutrients as possible. It is financially robust, is flexible in its crop selection throughout seasons, and can operate year round. Options exist for future expansion to produce its own fertilizer from organic sources, connect to other local industries for organic waste recycling, CO2 atmospheric scrubbing, and packaging production. 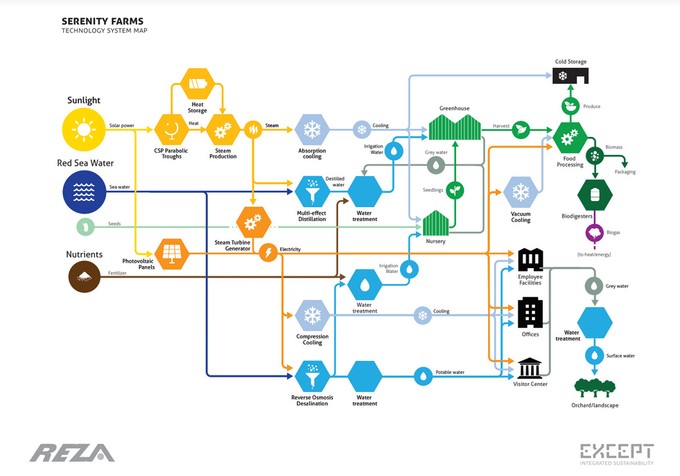 Growing into the future

The roadmap for Serenity Farms aims towards self-sustained cultivation in energy, water sourcing, and waste processing. Additional areas of ambition are sourcing of sustainable nutrient sources, and CO2 scrubbing. Serenity Farms produces organically as much as possible, closing its biomaterial loops, and being as circular as possible in its operations, including packaging. 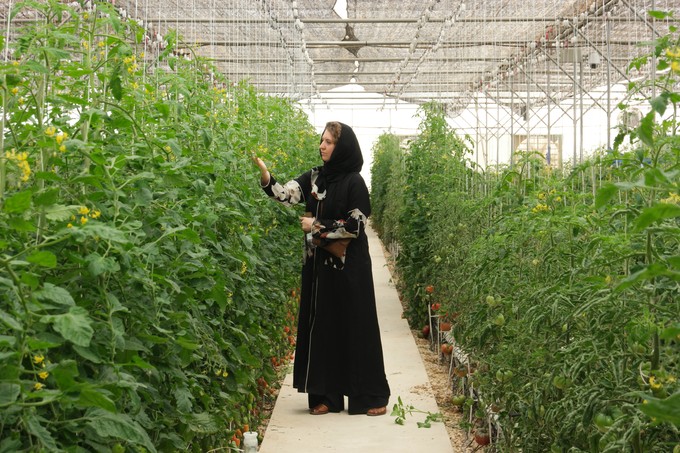 To meet the complex technical challenge of feasibly producing food at a profitable rate in difficult environments, Except created an advanced simulation and modelling tool. 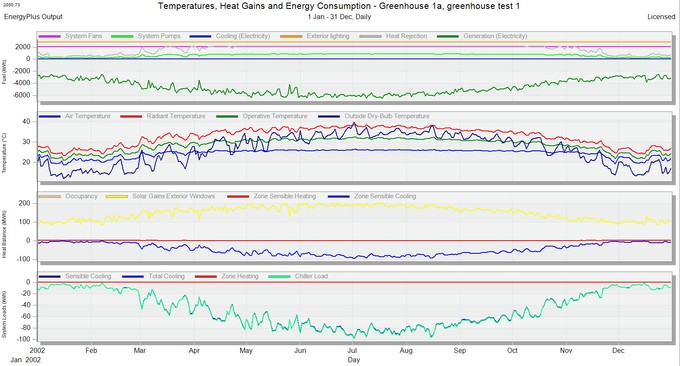 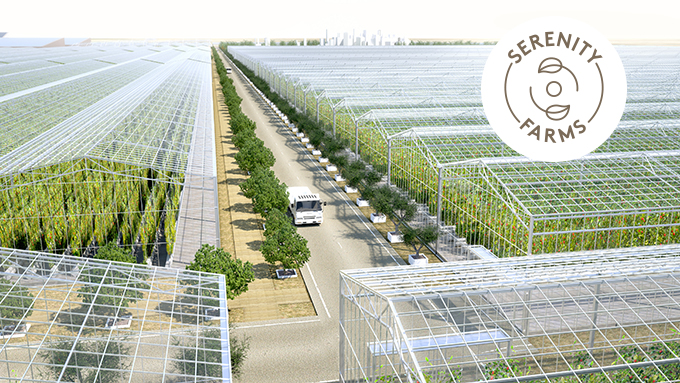